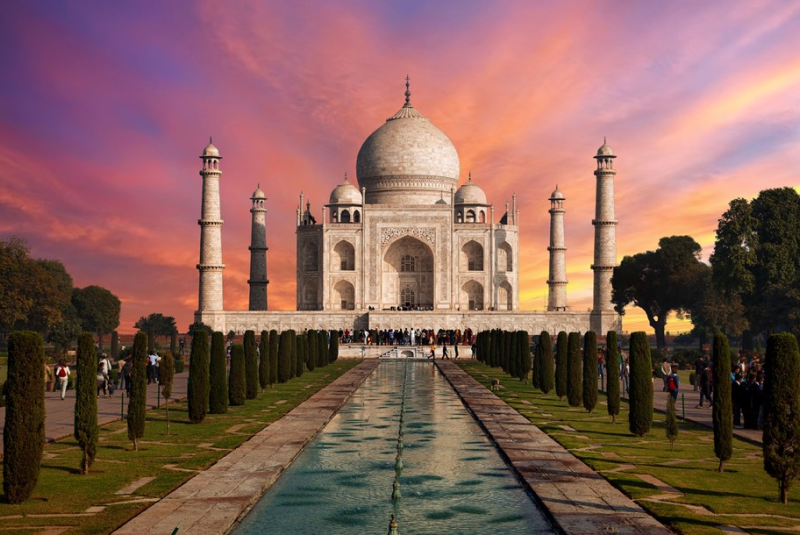 Originally designed by diocesan architect Francisco de Paula del Villar, the design and building of the temple was taken over by world-famous architect Antoni Gaudi. Though not originally intended to be a cathedral with its iconic towers and combination of Gothic and Art Nouveau style, it is one of the most iconic structures in the world and a testament to Gaudi’s unique architectural style.

Construction began in 1882, but the plans were partially destroyed during the Spanish Civil War and much time has been spent trying to piece them back together again. The building is due to be finally completed by 2026, a full century after Gaudí’s death.

The Burj Khalifa is the world’s tallest building. The mammoth skyscraper and magnificent centrepiece of Downtown Dubai stands at a whopping 828.9 meters high.

Construction began on the 160-floor building in 2004 with its doors opening six years later in 2010. The task of creating the world’s tallest manmade structure was awarded to the Chicago office of American architectural and engineering firm Skidmore, Owings and Merril LLP.

Designed by visionary architect Cesar Pelli and completed in 1996, the elegant modern design of the Petronas Twin Towers has made the building famous around the world. The outline of the structure resembles an immense ‘M’, symbolising Malaysia and the grandeur of the country’s aspirations and ambitions.

This list wouldn’t be complete without the most famous piece of leaning architecture.

The Leaning Tower of Pisa, whose turbulent construction began in 1173 and continued over 200 years of wars, is one of the truly iconic works of medieval European architecture. Its distinctive lean makes it instantly recognisable; while the 207 columns spaced around its eight stories are make it an astonishing example of Romanesque architecture. Visitors can climb its 297 step spiral staircase to look out over Pisa from the top of the tower.

Built from 1631 to 1653, the Taj Mahal is perhaps the finest example of Mughal art. Shah Jahan had the Taj Mahal built as a mausoleum for his beloved wife Mumtaz Mahal. His devotion inspired the creation one of the most famous buildings in the world, whose 240 foot high dome never fails to draw gasps from observers. The historical and cultural importance of the Taj Mahal is recognised by the fact that it is a UNESCO World Heritage Site.

Mirroring the enormous historical, cultural and religious changes of the history of its country, the Hagia Sophia is a truly unique building and a must-visit attraction for those who travel to Turkey.

Designed by Danish architect Jorn Utzon, the Sydney Opera House, renowned for its elegant sail-like structures, is a multi-venue arts complex and one of the 20th century’s most iconic works of architecture.

It hosts more than 1,500 performances and exhibitions a year, which draw the attendance of 1.2 million people. The sheer beauty of the Sydney Opera House draws more than seven million visitors a year to marvel at the building, which has also been made a UNESCO World Heritage Site.

This elliptical amphitheatre in the centre of Rome is considered as one of the greatest architectural feats achieved by the Ancient Romans. The stadium was capable of seating 50,000 spectators and used mainly for gladiatorial games.

Built from concrete and stone, construction began on the Colosseum began around 72AD and finished in 80AD. The design and shape of the Colosseum has been the inspiration for many modern day stadiums.

The Lotus Temple is a Bahá’í House of Worship in New Delhi consisting of 27 structures resembling petals of the lotus flower that open onto a central hall around 40m high. It has nine sides, nine doors, and can accommodate 2,500 people. Its surface is made of white marble from Mount Pentelicus in Greece, the same marble used to build the Parthenon.

Since its completion in 1986 it has become one of the most visited buildings in the world, attracting over 100 million people.

Saint Basil’s Cathedral was constructed between 1555 and 1561 when Ivan the Terrible ordered its construction to commemorate the capture of Astrakhan and Kazan.

It was the tallest building in the city until 1600 when Ivan the Great Bell Tower was constructed. Between the 16th and 17th centuries, it was regarded by the Byzantine Christianity as a symbol of the Heavenly City, and it was given the name Jerusalem. The building was constructed in the shape of rising flame a design that is unique among Russian architecture.

Petra is an archaeological and a historical city in the Southern part of Jordan which was known by the locals as Raqmu. It is believed that Petra was established in the early 6th century BC. The settlement could have begun in about 9000 BC in the region. The Nabateans, who constructed Petra, did so because of its proximity to important trade routes in the area.

In the 1st century AD, the popular Khazan structure was constructed which is believed to have been the mausoleum of the King of Nabatea, Aretas IV. During the Byzantine period, several churches of Christian faith were built. The significance of the city declined over the years and finally abandoned in the early Muslim era. It was listed by UNESCO as a World Heritage Site in 1985.

The Eiffel Tower is an iconic structure in Paris, France, named after Gustave Eiffel, who was an engineer responsible for designing and building of the tower. It is made of the wrought-iron lattice. It was constructed between 1887 and 1889 for the 1889 Universal Exposition World Fair.

Currently, it is the most visited monument in the world. It stands at 1,063 feet tall, which is the tallest structure in Paris. When it was constructed it surpassed the Washington Monument and became the world’s tallest human-made structure for 41 years until 1930 when the record was taken by the Chrysler Building in New York.

The Parthenon is a 5th century BC Greek temple which sits atop the hill of the Acropolis in Athens. Dedicated to the Greek goddess Athena Parthenos, the Parthenon was built by the architects Ictinus and Callicrates under the supervision of the sculptor Phidias.

Work began in 447 BC, and the building itself was completed by 438. Although the rectangular white marble Parthenon has suffered damage over the centuries, including the loss of most of its sculpture, its basic structure has remained intact.

Created in the 12th Century over three decades by King of the Khmer Empire, Suryavarman II, Angkor Wat located in Siem Reap (northwestern Cambodia) is the largest religious monument in the world.  Originally dedicated to the Hindu god Vishnu it was gradually transformed into a Buddhist temple. It also remains as the best preserved and largest temple in the ruins of the city of Angkor, and attracts millions of visitors a year.

The Heydar Aliyev Centre in Baku, Azerbaijan was designed by Iraqi-British architect Zaha Hadid in 2007 and opened in 2012. The centre’s amazing single continuous folded surface have made it an internationally recognised architectural work and one of the best examples of the Neo-futurism style. The centre won the Design Museum’s Design award in 2014 making Zaha Hadid the first woman to win the top prize in that competition.

16) The Palace of Westminster, London, UK

The Palace of Westminster, more commonly referred to as the Houses of Parliament, is the symbolic centre of political power in the United Kingdom. The building, on the northern bank of the River Thames in London, incorporates the House of Commons and the House of Lords which together act as the UK's Parliament.

It was designed according to the Gothic tradition by the architect Charles Barry and Augustus Pugin, and was constructed between 1840 and 1870. Perhaps its most iconic feature is the Elizabeth Tower, more famously known by the name of its bell, Big Ben.

This building used to be the tallest building in the world and a movie or TV show never completed without it appearing on the screen. The Empire State Building, a National Historic Landmark, is New York’s most renowned symbol, built with great pride in 1930.

A contest was held during the 1880s to find an architect for a new Hungarian Parliament Building which would represent the nation’s sovereignty. Drawing inspiration from London’s Houses of Parliament, the winner was Hungarian architect Imre Steindl who designed the grand, neo-Gothic building which stands today.

The construction of the Parliament Building took 17 years, and it is the country’s largest building, Budapest’s tallest, and the third largest parliament building in the world.

19) The Great Pyramid of Giza, Egypt

The Great Pyramid of Giza in Egypt is one of the Seven Wonders of the World, and the oldest and largest pyramid of them all. Built as tombs for the Third and Fourth Dynasty’s pharaohs, the Giza Pyramids are some of the most famous constructions on Earth.

Notre Dame Cathedral – perhaps the most iconic example of Gothic architecture.  Initially conceived by Bishop Maurice de Sully, the building of the world’s most famous gothic cathedral began in 1163, and was completed almost 200 years later in Paris, France.

Architecturally famous for its pioneering of the rib vault and flying buttress, the Cathedral has survived wars, revolutions and most recently a massive fire which destroyed much of its interior and its iconic spire but left the main structure intact.

TOP 20 FAMOUS BUILDINGS ACROSS THE WORLD